The pride of Gaspe 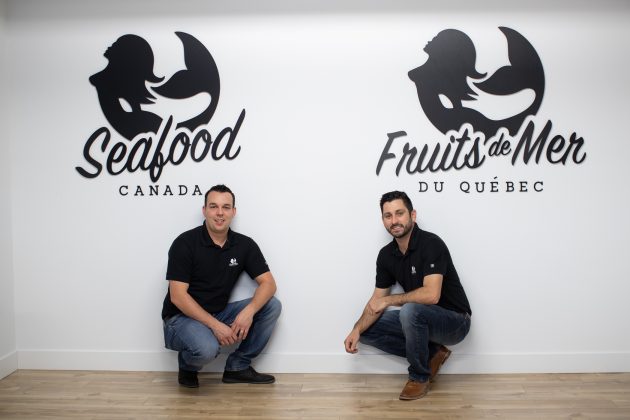 Former construction worker Dary Côté says some people scoffed at his business prospects when he started to buy and sell frozen seafood products from his native Gaspe region at a Montreal-area farmer’s market in 2017. Who’s laughing now, though? In just four years, Côté and childhood friend and business partner Denis Fortin, both 38, are at the helm of a fast-growing seafood company that will this year sell half-a-million products worth nearly $8 million at more than 400 IGA outlets and independent food stores across Quebec.

They expect those numbers to double over the next two years as their company, called Fruits de Mer du Québec, continues to develop and expand its line of ready-to-cook prepared seafood meals and enters new Canadian markets, starting with Ontario in the new year, under its new Seafood Canada division.

“We took the market by storm,” said Côté, who runs sales and marketing from the company’s office in Montreal. Fortin, for his part, handles supply and production at a HACCP-, GFSI- and SQF- certified seafood processing plant near Drummondville. 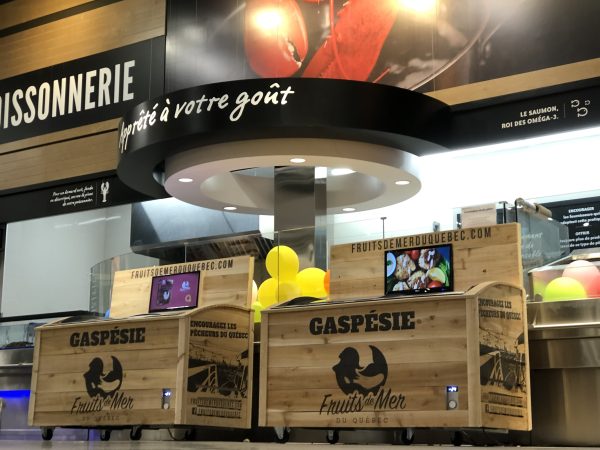 Fruits de Mer du Québec currently accounts for about 70 per cent of the Nordique plant’s production capacity, churning out between 15,000 and 25,000 frozen, vacuum-sealed seafood items a day, depending on the product, in a single shift. The arrival of 20 foreign workers in August nearly doubled the company’s workforce at the plant and has led to the addition of a second production shift. 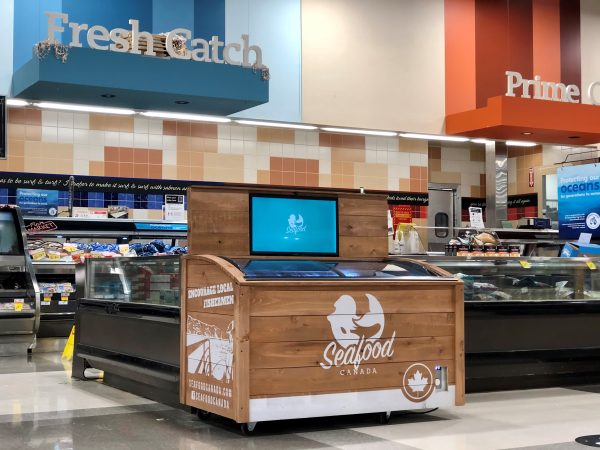 Fruits de Mer du Québec’s products are typically sold out of floor freezers that are set within wooden crates. The crates are stamped with the company’s name and logo. They are equipped with TV screens that show on loop images of the Gaspe fishing industry.

In addition to processing shrimp, scallops, halibut and other crustaceans, molluscs and fish harvested by hundreds of producers from the icy waters surrounding the thumb-shaped Gaspe Peninsula, the company also produces a half-dozen frozen prepared dishes including cod cakes, seafood pot pies and smoked fish that are packaged and served on a small wood board.

Many of those dishes, which will be sold in refrigerated ready-to-eat counters of food stores rather than in the frozen seafood section, are made using recipes from Côté and Fortin’s families and other popular Gaspe foods.

“Our seafood lasagna is based on my Aunt Line’s recipe,” said Côté. “We even named the product after her. We think it adds to the appeal and authenticity as a local product.” 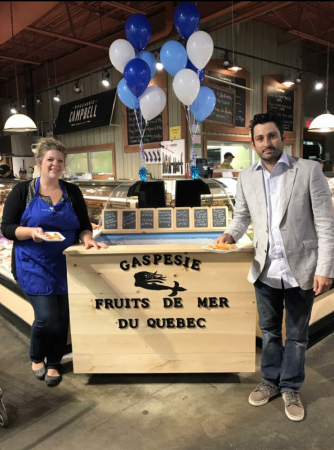 According to Côté, his company is helping to bring the world-renowned quality of fresh Gaspe seafood to the plates of consumers in Quebec.

It was a feat, he added, that many people thought couldn’t be done. That’s because the vast majority of catches in the Gaspe region are bought and sold by 15 to 20 local and regional plants, processors and brokers.

“Most of the production is sold wholesale for export to Europe and other markets,” said Côté. “My idea was to sell directly to Quebec consumers in food stores.”

The challenge, he added, was convincing wholesalers to divert some of their in-demand products to his new business.

“A couple of guys had tried what we’re doing now back in the 1990s,” said Côté. “They didn’t do very well (and) I know some people in the business believed we wouldn’t do any better.”

Côté thought otherwise. Born and raised in the coastal village of Grande-Vallée on the north shore of the Gaspe Peninsula, he left the region at age 16 to work in the construction industry in Montreal.

An interior systems’ specialist who eventually owned a commercial building business with 80 employees, Côté said he was always asked by friends to bring them back fresh seafood from the Gaspe whenever he visited the region.

“I used to go back there a lot to see my family and friends,” recalled Côté. “I would drive back to Montreal with $5,000 worth of fish in the trunk of my car.”

Eager for a new challenge outside of the construction business, Côté decided in 2017 to pursue what he saw as a business opportunity: satisfying Quebec consumers with locally produced, world-class seafood from Gaspe.

“I visited a lot of grocery stores and there were hardly any fish or lobster or shrimp from the Gaspe,” he said. “They were all imported products.”

Côté first convinced Fortin, a childhood friend who was then mayor of Saint-Cloridorme, a neighbouring village of Grande-Vallée, to join him in the venture.

Though neither of them had any personal or family connection to the fishing industry in Gaspe, they each brought complimentary ideas, energy, resources and contacts to the project.

“We know our strengths,” said Fortin, who owned a long-distance taxi service that he quickly converted to transporting fish and seafood products instead of people. “Dary is a great salesperson (and) I handle supply and production. We make a good team.”

The duo decided from the get-go to focus their efforts on eye-catching product packaging and in-store displays.

Their most notable innovation was dreamed up by Côté: floor freezers contained in wooden crates that are stamped with the company’s name and logo and are equipped with TV screens showing images of the Gaspe fishing industry.

The freezers are also now being equipped with cameras, allowing inventory to be monitored remotely by software that triggers alerts when resupply is needed.

“Our mission was to make Gaspe seafood accessible, distinctive and recognizable,” said Côté. “We wanted our products to jump off the shelves.”

With $1.6 million financing from an angel investor, their own savings and help from their wives, Côté and Fortin landed supply and processing deals with several of the fishers, processors and packagers that belong to the Association québécoise de l’industrie de la pêche (Quebec Fish Processors Association [AQIP]), a group they have since joined.

Based in Quebec City and the oldest association of its kind in Canada, the AQlP’s 54 member and associate members represent more than 90 per cent of seafood processing in la belle province, an industry that employs more than 5,000 people and has produced more than $600 million worth of value-added seafood products since 2018.

The vast majority of those products come from catches in the waters of the Gulf of the St. Lawrence, including the Gaspe Peninsula, the North Shore and the Magdalen Islands.

Côté began selling his new company’s wares at a seasonal farmer’s market near his home in the Laurentian hub of Saint-Jérôme, a half-hour drive north of Montreal.

Soon, he was selling at local butcher shops and some two-dozen independent and chain food stores of all size and stripes.

“It was crazy,” Côté recalled about the speed-dating style weekend event in Gatineau, when he and Fortin demonstrated their crated freezer and brightly packaged products to food store owners from across Quebec, beating out a dozen other suppliers in an onsite vote by conference attendees. “We landed a ton of deals at the show and afterward. We’ve never looked back.”

Both partners are confident they can continue their success in other regions of the country albeit under the a new ‘Seafood Canada’ moniker.

“The ‘Fruits de Mer du Québec’ brand works great here,” said Côté. “People want to buy local products and encourage local businesses. So, we are talking with suppliers from other provinces in order to help broaden our appeal in those markets.”

This article was originally published in the October 2021 issue of Food in Canada.