Their brewery, Lagabière, is set to become one of the biggest in Quebec. 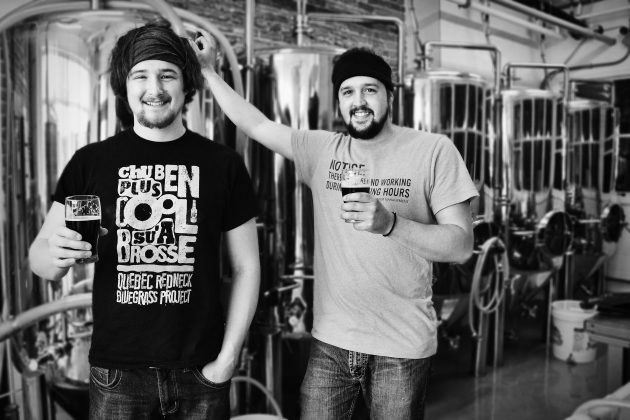 Brothers Sébastien and Francis Laganière take pride in both the quality of the beer they make and the success of Lagabière, the brewing business that began in their parents’ garage a decade ago and is set to move into a new $8-million plant in their hometown of Saint-Jean-sur-Richelieu, a half-hour drive south of Montreal.

The two brew brothers also like to have fun mashing up novel recipes and products for the enjoyment of their legions of loyal fans and followers, and to entice craft beer lovers in markets across Quebec and beyond to sample their growing line of popular products. A recent example is the one-run, 15,000-litre batch of extra-strong beer they made in December 2020 that is called the Le Troisième Circle, a tongue-in-cheek reference to Dante’s dark 14th-century allegoric poem, The Nine Circles of Hell, the third circle being gluttony.

Made with cream cookies, chocolate, bourbon-infused cocoa and vanilla aged in bourbon-imbibed barrels, the imperial pastry or dessert stout packed a 10 per cent alcohol wallop in each of the visually striking, 437-ml cans it was packaged in.

Much to the brothers’ amazement, people began cueing outside their pandemic-shut brewpub, Lagabière Brasserie Artisinale, in downtown Saint-Jean to buy take-out orders of the new, sweet, gluten-free brew right after their sale was posted on social media.

“We had a terrific response,” said Sébastien, the company’s master brewer. “It was totally unexpected. We had a line up around the block for two days, until we were sold out.” 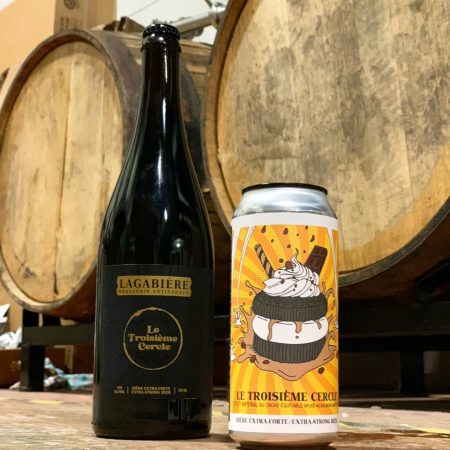 The Le Troisième Circle is made with cream cookies, chocolate, bourbon-infused cocoa and vanilla aged in bourbon-imbibed barrels.

The suds frenzy was just the latest success in the brothers’ meteoric rise in the Quebec beer business. In just seven years, they have gone from startup brew pub owners to commercial brewers and retailers who sell five regular brand-name products in more than 1,000 stores across la belle province. Later this year, they will move into a newly-built, 19,000-sf factory in Saint-Jean that will be able to produce seven million litres of beer a year, nearly seven times their current capacity.

“We will become one of the biggest breweries in Quebec,” said Francis. “It will enable us to meet the growing demand for our products and to pursue many new and exciting opportunities here and abroad.”

Though they plan to experiment with similar, limited releases of sweet beers like Le Troisième Circle—along with an array of pilsners, stouts and fruited beers—the Laganière brothers’ forte is and will remain hop-intense India Pale Ale (IPA).

It’s been that way since they first started brewing beer at home 15 years ago as curious teenagers. “We bought some plastic buckets from a local hardware store and used a cardboard box as a fermenter and went at it,” recalled Francis, now 30 and the father of two infants. “We really enjoyed experimenting with hops and malts and stuff.”

Encouraged by rave reviews from family and friends, the brothers started making larger batches of IPA to supply big family get-togethers and keg parties with their friends.

Things got serious when the friend-of-a-friend ordered a 100-litre batch in 2009, and their parents gave them a 120-litre fermenter for Christmas.

By then, Sébastien was studying film-making at college and moonlighting as a brewer for Quebec micro-brewing pioneer Pascal Desbiens, owner of AMB Maître Brasseur in the off-island Montreal suburb of Laval.

“Everything I learned there helped to make our beer that much better,” said Sébastien, now 33 with two young kids of his own. “The more people tasted our beer, the more they liked it. So, Francis and I decided to try and make a living at it.” 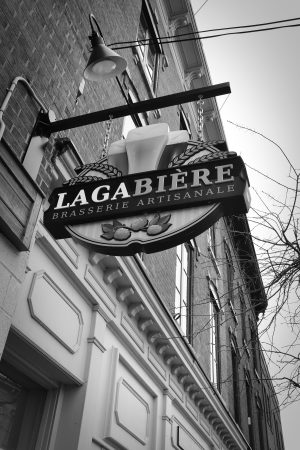 The brew pub opened in November 2014.

With $180,000 in financial backing from their parents, who used the family home as collateral along with Sébastien’s old 1992 Toyota Camry, the brothers proceeded to rent a storefront in downtown Saint-Jean.

“We installed curtains in the windows, gutted it and installed a 500-litre brewing system with five fermenters that would allow us to do two or three turnovers and brew 1,000 litres a week,” recalled Sébastien.

The brew pub opened in November 2014 with a single IPA beer called Ta Meilleure. Though they have added dozens of new flavours and created more than 200 recipes since then, Ta Meilleure (“Your Best”) remains by far their most popular product.

The pub proved so successful that the brothers were unable to keep up with demand. “We were always out of stock,” said Sébastien. “We had to order beer from other breweries just to keep our taps flowing.”

To relieve the pressure, they opened a production facility in an industrial park five kilometres away on the opposite shore of the city’s namesake Richelieu River in 2016.

The goal of the new facility, which was equipped with a single Chinese-made vessel system with a mash ton and kettle that had a daily capacity of 45 hectalitres, was to meet the demand at the brew pub. However, everything changed overnight when Ta Meilleure won ‘Best Beer’ at Quebec’s biggest and most prestigious beer festival in nearby Chambly.

“The next day we were swamped with calls from retailers across Quebec who wanted our beer,” said Francis, who handles the administrative side of the business. “We were totally unprepared. I was writing orders down on slips of paper and we were running around like crazy guys.”

Going flat out with a single bottling machine, the brothers began producing and delivering six packs of 34-ml and 500-ml ales in old vans, the first of which they bought for $1,000, and caught fire not long after in a customer’s parking lot.

They soon switched from bottles to cans—one of the first Quebec microbrewers to do so—buying first a three-head filler from Calgary’s Cask Brewing Systems, then a U.S.-made Twin Monkeys system that produced 80 cans a minute.

“The switch to cans was a great move,” said Francis. “They cost and weigh less, they don’t break, recycle easier and we don’t have to take back dirty bottles from retailers. Now, we don’t have fruit flies everywhere in our plant.”

Another big advantage with cans, he added, is the ability to design and make stylish, brightly coloured labels that have helped to raise the visibility and appeal of their products and brand.

“We use fun, eye-catching stuff like magic hats with spirals,” said Francis, who credits craft breweries in the northeastern U.S. for Lagabière’s design inspirations. 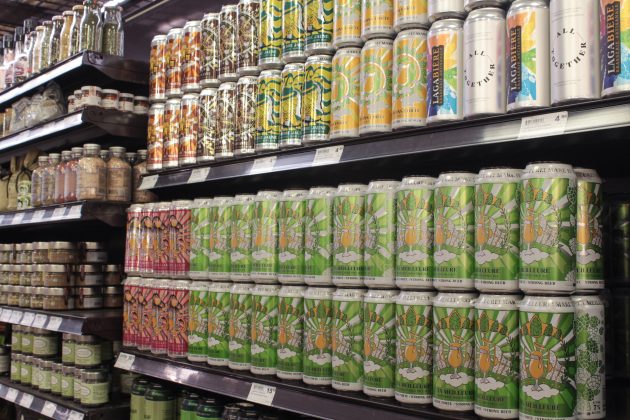 Colourful can designs help Lagabière’s products to stand out on store shelves.

Having colourful cans, he added, helps their products to stand out from competitors on Quebec grocery store shelves. “Most popular craft beers here have dark colours and depict folkloric monsters and stuff,” said Francis. “Our cans are bright and fun. We often hear from people that they not only love our beer, but also our labels. That’s great because we want our beer to be enjoyed, but we also want our products to be fun.”

In late 2019, the brothers got the thumbs up for financial assistance from three sources—Investissement Québec, Desjardins Enterprises and Quebec’s agricultural ministry—for their new plant, the exterior of which is now built.

Once operational in September, the new facility will be equipped with a tasting room, the canning machine from their old plant and five vessel systems supplied by Victoria B.C.’s Pacific Mechanical.

In addition to their regular Quebec customers, the brothers hope and plan to export overseas, notably to big beer drinking markets like Australia, Japan and South Korea. They also intend to grow and expand their presence in the United States, where they have had great success selling small quantities of their products through a distributor.

“We had thought about changing our product names to English,” said Sébastien. “But then we decided to keep the original French names because it makes them more exotic and adds to the fun.”