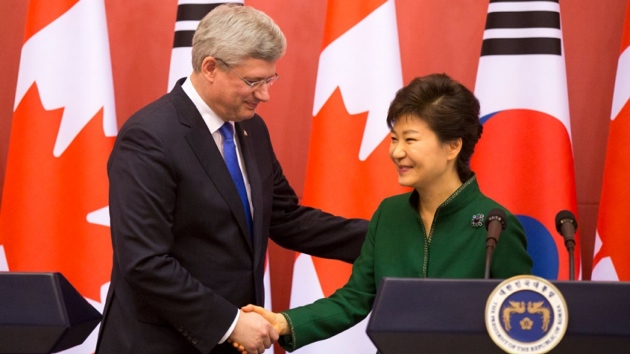 This is Canada’s first with an Asian market and the federal government says it will create thousands of new jobs in Canada.

It will also provide Canadian businesses and workers with a gateway to Asia, and level the playing field for Canadian companies competing with Korea’s other trading partners, including the U.S. and the E.U. (both already have free trade agreements with Korea).

Korea is a key market for Canada, it’s the world’s 15th-largest economy (at $1.1 trillion) and the fourth-largest in Asia, with a population of 50 million.

Consumers in Canada will benefit from a greater variety of goods at lower prices, as the Free Trade Agreement will cover virtually all aspects of Canadian-Korean trade: goods and services, investment, government procurement, environment and labour cooperation, and other areas of economic activity.

The agreement will eliminate tariffs and reduce non-tariff measures that hinder market access for Canadian exporters and investors in Korea.

Once the agreement is fully implemented, Korea will remove duties on 98.2 per cent of its tariff lines, covering virtually all of Canada’s imports.

The Canada-Korea Free Trade Agreement will benefit a wide range of sectors, including:

The agreement will also benefit Canada’s services sector and strengthen opportunities and protection for two-way investment.

In the agricultural sector, South Korea will gradually eliminate tariffs on nearly 87 per cent of products coming from Canada, reports the CBC.ca.

For instance, tariffs on Canadian beef and pork would be gradually eliminated over a period of five to 15 years depending on the product. The agreement will not affect Canada’s supply management.

During the negotiations, many of Canada’s industries called on the federal government to conclude a deal with Korea.

The Canadian Pork Council (CPC) says it welcomes the news of the agreement. The council has been a strong advocate for free trade with Korea because it will allow the pork industry to be on an equal footing with its competitors – the U.S., the E.U. and Chile – in what has at times been the industries third or fourth most important export market.

The CPC says South Korea has always been a top five market and the high value of the items sold there, such as chilled (shoulder) butts and bellies, is significant enough to have a major impact on Canadian hog prices and jobs in both the farming and processing sectors should Canada lose access to the market.

“The completion of a Canada-South Korean Free Trade Agreement was of critical importance for the Canadian pork sector.  Korean people recognise the quality of Canadian pork due and we look forward to rebuilding market share lost in South Korea,” says CPC’s Chair Jean-Guy Vincent.

“The absence of an FTA with Korea was causing substantial and growing prejudice to the Canadian pork industry due to the tariff rates since all of our key competitors in Korea have FTAs in place.”

The Canadian Cattlemen’s Association (CCA) was also pleased with the news.

The CCA says the tariff has been the main impediment to accessing the Korean market since Korea lifted its BSE prohibition on Canada in early 2012, explains Dave Solverson. CCA president.

“For the past few years, Canada’s key beef competitor, the U.S., has enjoyed an increasing tariff advantage flowing from its FTA with South Korea. Today’s announcement means Canadian beef will be able to once again compete for meaningful access in the Korean market,” Solverson said from Seoul, where he was with Prime Minister Harper for the announcement.

The impact of the tariff disadvantage is clear. In 2002, Korea was a $40 million market for Canadian beef and its fourth largest export destination.

In 2013, with a growing tariff disadvantage relative to U.S. beef, Canada exported $7.8 million. The Canada-Korea FTA will signal to Korean buyers that they can resume their relationship with Canadian beef and maintain a long-term competitive position.

“This is excellent news for Canadian beef producers,” says Dan Darling, CCA Vice President and Foreign Trade Chair. “The ability to get every piece of the animal to the highest value market is what maximizes prices at the farm gate. I particularly like that we will be getting an aggressive phase-out on offals that get more value in Korea than they do here in North America.”