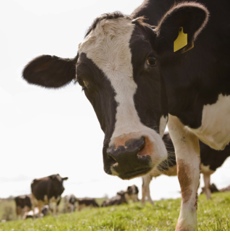 The U.K. Food Standards Agency (FSA) has announced that products from the offspring of cloned cattle have entered the food chain.

There were eight calves born in the U.K. from embryos harvested from a cloned Holstein cow in the U.S., four male and four female. According to the FSA’s investigation, meat from two of the bulls entered the food chain in 2009 and in May of this year. A third bull was slaughtered in July, but its meat has been prevented from entering the food system. The fourth male calf died at one month old, and its meat did not enter the system.

To date there is no evidence that milk from any of the cows entered the system, although the FSA has only been able to trace one of the cows to a U.K. dairy farm. Two other female cows are being investigated, and the fourth died at less than one month old.

While there is no evidence that products from cloned animals or their offspring pose any health or food safety risks, these products are considered novel foods, and their entry into the food system would have to be authorized under the U.K.’s Novel Food Regulations.

The FSA is currently tracing offspring from these animals, which at present would be too young for milking or used for breeding. Records suggest that there may be more than 100 “third-generation clones” in the U.K.