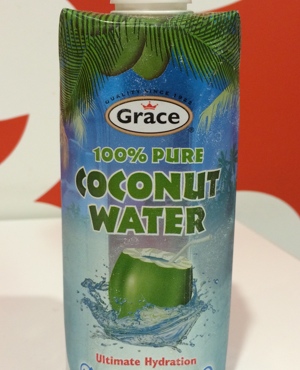 Toronto – GraceKennedy (Ontario) has introduced a line up of coconut products. 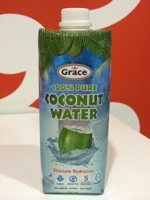 • The line up includes Grace 100% Pure Coconut Water, which comes from the liquid of young, green coconuts with no water, sugar or preservatives added.

• Another product in the line up is Grace Coconut Milk, which is a sweet, non-dairy milky white cooking base derived from the meat of mature coconuts.

The milk is rich and is extracted by breaking down the white kernel of mature coconuts until the milk runs out. It’s popular with vegans and those who are lactose intolerant. It’s ideal for smoothies, rice, curry, desserts, soups and sauces. 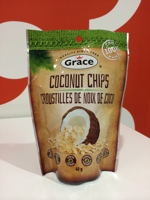 • Another product in the line up is Grace Coconut Chips, which are made from the meat of mature coconuts using a traditional process to preserve their natural goodness. The coconut meat is gently sliced and roasted under low temperature until it turns into crispy chips that can be used as a snack or a garnish. The chips are high in lauric acid, low in sugar and contain zero cholesterol.

• There’s also Grace Coconut Sugar, which is a rich unrefined natural sweetener with a slight hint of butterscotch and caramel. It is made from 100% nutrient rich sap collected from tender coconut flower buds.

The sugar also contains inulin, which gives coconut sugar a lower glycemic index than regular table sugar limiting glucose fluctuations often associated with other sugars. It’s ideal for diabetics or those who want a low-calorie sweetener.

• There’s also Grace Organic Vinegar, which is created by fermenting 100 per cent pure coconut water. It is 100 per cent natural and does not contain any of the harmful substances that commercial vinegars may contain. The vinegar is kosher, gluten-free and vegan.

• There’s also Grace Organic Coconut Flour, which is made from dried, ground coconut white meat from mature coconuts. The flour has an airy texture, a light coconut flavour and has twice the amount of fibre and protein than wheat flour.

• Finally, there’s Grace Coconut Oil, which is available in All Natural (500 mL) and Organic (1 L) and is cold pressed, which preserves the natural goodness of coconuts. These products are virgin oils therefore not refined, bleached or deodorized so the lauric acid remains intact.